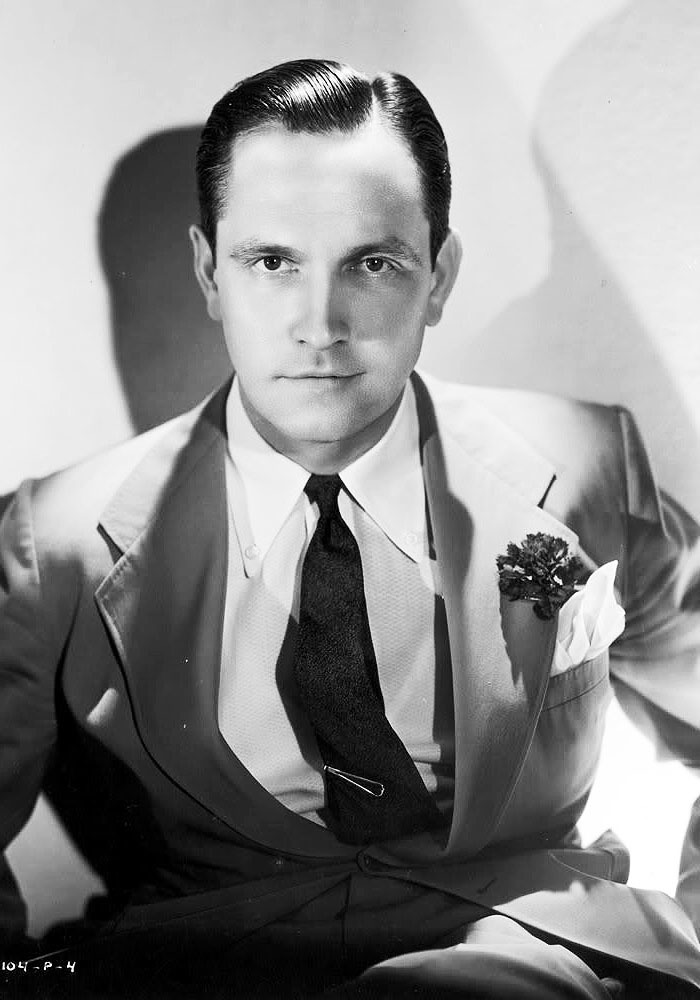 The films released during Hollywood's pre-Code era undeniably have their fair share of admirable, upstanding fellas. You have Warren William's long-suffering hubby in Three on a Match (1932); Leslie Howard as the sensitive and understanding fiance of Norma Shearer in A Free Soul (1931); and the good-hearted soldier, brought to life by Douglass Montgomery, who falls in love with a woman of ill repute in Waterloo Bridge (1932).

More often than not, though (and thank goodness), pre-Code features are also chock-full of men folk who are not exactly the type of guy who married dear old mom. Instead, they're dishonorable, unethical, immoral, and just plain flawed. I love 'em!

This post kicks off a series that will take a look at the flawed gents of pre-Code, starting with one of my favorites, Jerry Corbett in Merrily, We Go to Hell (1932).

Played by Fredric March, Jerry is a Chicago newspaper columnist and aspiring playwright who falls for Joan Prentice (Sylvia Sidney), heiress to a canned goods fortune. After a whirlwind courtship, Joan agrees to become Jerry's wife, despite Jerry's fondness for the bottle and after he warns her that 'any girl would be a fool to marry a man like me.'

After taking his vows, Jerry manages to walk the straight and narrow while he works toward his dream of becoming a playwright, but all hell breaks loose - as the title implies - when his play is finally produced and becomes a hit. It's at this point, in case you hadn't already guessed, that it becomes clear beyond all doubt that we're dealing with one flawed fella. Let's take a look at the evidence:

Our first glimpse of Jerry is at a swanky cocktail party inhabited by a swarm of swells. But Jerry's not chatting with his elegant hostess or nibbling on some tasty crudites. Instead, he's on the patio, crouched behind a table filled with liquor bottles, surreptitiously flicking bottle tops in the direction of the party goers inside. 'Silly people,' he slurs, chuckling to himself. 'I don't like that fellow with the little mustache.'

Not long after a 'meet cute' at the party, Jerry and Joan start dating, but he doesn't waste much time in informing her that he prefers the company of men to women. It's not that he hates women, Jerry assures Joan: 'I just don't think about them very much.'

Jerry tells Joan about his ex-girlfriend, Claire Hempstead (Adrianne Allen), admitting he still looks at her photograph 'every once in a blue moon.' In actuality, as we learn when Jerry returns to his apartment, Claire's photo hangs on the wall above his desk.

At the couple's party to announce their engagement, Jerry shows up hours late, and when he finally makes an appearance, he's three sheets to the wind, passed out in the back seat of a taxicab. Undeterred, Joan ignores her best friend's advice and goes through with the elaborate wedding ceremony where, instead of a gold band, Jerry places a corkscrew on Joan's finger. (You read that right -- a CORKSCREW.)

Once married, Jerry manages to stay sober while struggling to fulfill his dream to become a playwright, but he dives headfirst back into the bottle when his play is finally produced, starring his old flame, Claire. By the time the curtain rings down on the play's opening night, Jerry is completely cockeyed. Later that night, as Joan dutifully helps him get undressed, Jerry drunkenly expresses his gratitude: 'Thanks, Claire.'

In an effort to show Jerry how he looks when he's drunk, Joan forces down several glasses of booze. But when she faces her husband with bleary, unfocused eyes and slurred speech, she finds her plan has backfired. Instead of viewing her as a mirror held up to reflect his own shortcomings, Jerry finds her charming. 'Really, Joan, you ought to get tight oftener. Merrily, we go to hell!'

Jerry starts an affair with Claire and, determined to be a 'modern' wife, Joan decides that what's good for the goose is good for the gander -- she stays with Jerry but insists on having the same 'privileges' he enjoys. But when the couple's open marriage extends to Jerry bringing Claire home and kissing her passionately in front of his wife and a room full of guests, it's too much even for Joan. To his credit, when Joan walks out on him, Jerry finally wises up, realizing he's been devoting his energies to a fantasy 'when all the time I had a wonderful reality in my arms.' Unfortunately for Jerry, his revelations may have come a bit too late.

Of all the flawed gents in the world of pre-Code -- and goodness knows there's no shortage -- Jerry Corbett ranks up there with the worst of them. He's a character who seems to function under a cloud of inescapable doom, leaving you to wonder just how far he will go, and how low he will sink. As Jerry, Fredric March serves up a fascinating portrait of a man battling to overcome his demons -- not only against alcohol, but against the lingering lure of his first love.

His inner weakness is nearly his undoing, demonstrated most compellingly when, on the opening night of his play, he announces his intentions to go to Claire unless his wife prevents him. 'If you love me, you'll lock that door so I can't get out,' he says, pitifully unable to stop himself. March infuses this scene with pathos and heartbreaking frailty, invoking our sympathy as he leaps headlong into an affair.

If you've never seen Merrily, We Go to Hell, you only owe it to yourself to check it out. Directed by Dorothy Arzner, it's a pre-Code gem, featuring a standout performance by Fredric March as a truly broken gent.