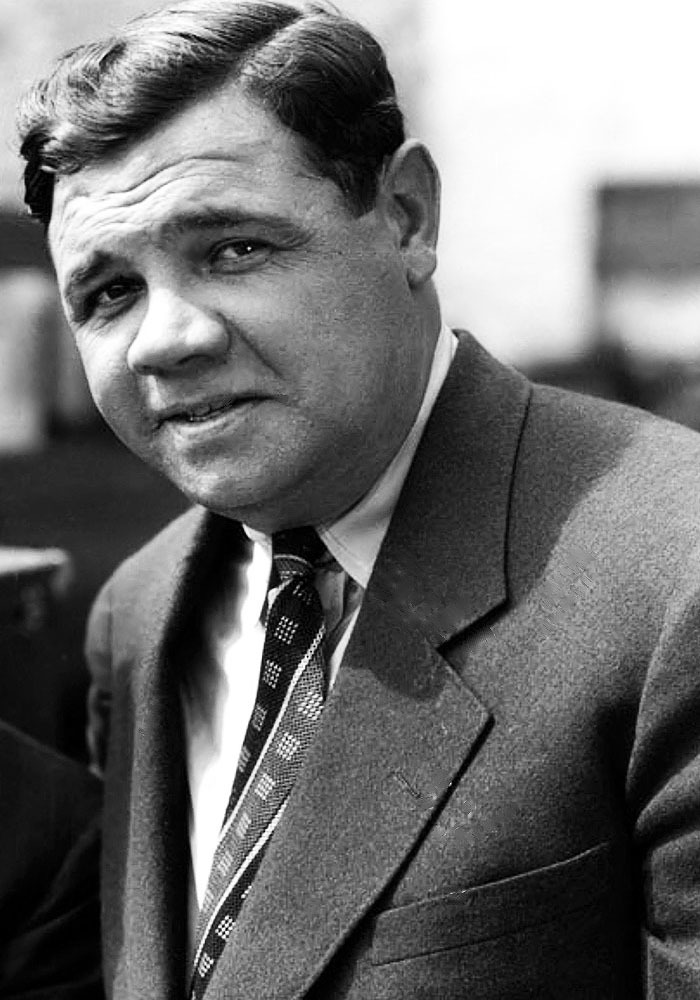 The age of silent movies coincided with some of the most exciting years in the history of baseball. Babe Ruth and Ty Cobb set records when the movies were moving to the west coast and feature-length films were being established as the dominant form of cinematic entertainment.

Players in the Movies

Babe Ruth famously made a cameo appearance in Harold Lloyd's comedy classic Speedy but his acting resume is considerably longer than many people may realize. In 1920, Ruth starred in what was marketed as a biopic, Headin' Home, the true story of how the Sultan of Swat became a professional baseball player. We're used to seeing athletes with their warts in the spotlight. In 1920, the filmmakers decided to turn Ruth's rough-and-tumble past into a bucolic childhood. Ruth is cast as a Tol'able David sort of country boy butter wouldn't melt. It's all bunk, of course, and the whole thing ended in lawsuits but it is a fascinating time capsule. Ruth himself is not a natural actor (he improved a bit in Speedy) but the film is fascinating for the history.

Oh, and about the 'Sultan of Swat?' The phrase was supposedly coined by journalist Bugs Baer who wrote the title cards for Headin' Home. They're a strange blend of cliche, corny country-isms and attempts at humor. I'm afraid Baer was better suited to sports journalism than screenwriting.

Ty Cobb beat Ruth to the screen with Somewhere in Georgia (1916, some sources state 1917). Like Headin' Home, the film stars an athlete as himself and shows how he embarked on his career. No copies of Somewhere in Georgia are known to survive, so we must rely on contemporary reviews to piece together its plot. According to the AFI Catalog, 'A bank clerk (Cobb) in love with the banker's daughter finds he has a competitor in the bank cashier, who also wants to marry the girl.' I know this comes as a shock, but the rival turns out to be a royal nogoodnik who tries to kidnap Cobb before the big game. This scheme fails, of course, and Cobb ends up with both the girl and a career in sports.

While it is impossible to judge a film without seeing it, it looks as though Cobb's foray into dramatic fiction was not a success and his subsequent film appearances were as himself, the baseball player (as opposed to romantic hero). The romance, it seems, was better handled by the movie stars of the era.

Baseball was present in cinema from the very beginning. An 1899 film entitled Casey at the Bat; or, The Fate of a 'Rotten' Umpire is thought to be the earliest baseball-themed fiction movie. The plot (and please remember movies were only a few minutes long at this point) involves a bad call and the titular batter deciding to take vengeance into his own hands.

Casey at the Bat's violence was abandoned in later baseball films that favored romance and family. Okay, maybe a few brawls here and there but love was what really mattered. Two excellent examples of the sports film (in the modern sense) star Charles Ray. Ray, if mentioned at all, is used as an example of a star that got too big for his britches, poured his money into a gigantic epic and then lost everything when the picture bombed. Ray's infamous bomb, The Courtship of Myles Standish, is missing and presumed lost, so we will never know if his risk paid off artistically. In any case, Ray was a popular leading man of the silent era and deserves to have his surviving work judged on its merit.

The Pinch Hitter (1917) features Ray as an awkward college kid who ends up qualifying for the school's baseball team. It turns out the cruel players have made him their mascot, but it's the day of the big game and they have no one else to go to bat for them. What do you think happens? Ray goes out and wins the thing. Corny? Heck yeah, but audiences of the day ate it up with a spoon. Come on, feel-good sports movies are supposed to be a little cheesy. It's in their DNA.

Ray also starred in The Busher (1919), the story of a bush league player who gets a chance to make the big time playing for the Pink Sox. (Get it? Get it? Because red and white make pink!) Naturally, the fame goes to his head and he becomes a perfect twit. Do you think he'll have to eat crow? Do you think he will manage to put aside his ego to save the day when his old bush league team is down? Of course!

The Busher is another classic sports film yarn but the supporting cast is what makes it interesting. A pre-flapper Colleen Moore plays Ray's love interest, a sweet country girl who just wants her erstwhile lover to see the light and lose his conceited ways. And a pre-mustache John Gilbert plays the rich boy in town who tries to steal Moore's affections from under Ray's nose. Both players are still a little rough around the edges but their charisma is obvious and it is enormously entertaining to see them so young.

Sports films and baseball films are still made today, but it is always fun to take a walk down memory lane and see where all the tropes and traditions started. Baseball truly was America's pastime in the silent era and the affection for the sport bleeds onto the screen. It was a beloved game and people couldn't get enough of it in sports arenas and muddy fields; they wanted their screenland favorites to play it as well. These films are a true time capsule of their era and many still hold up as entertainment.