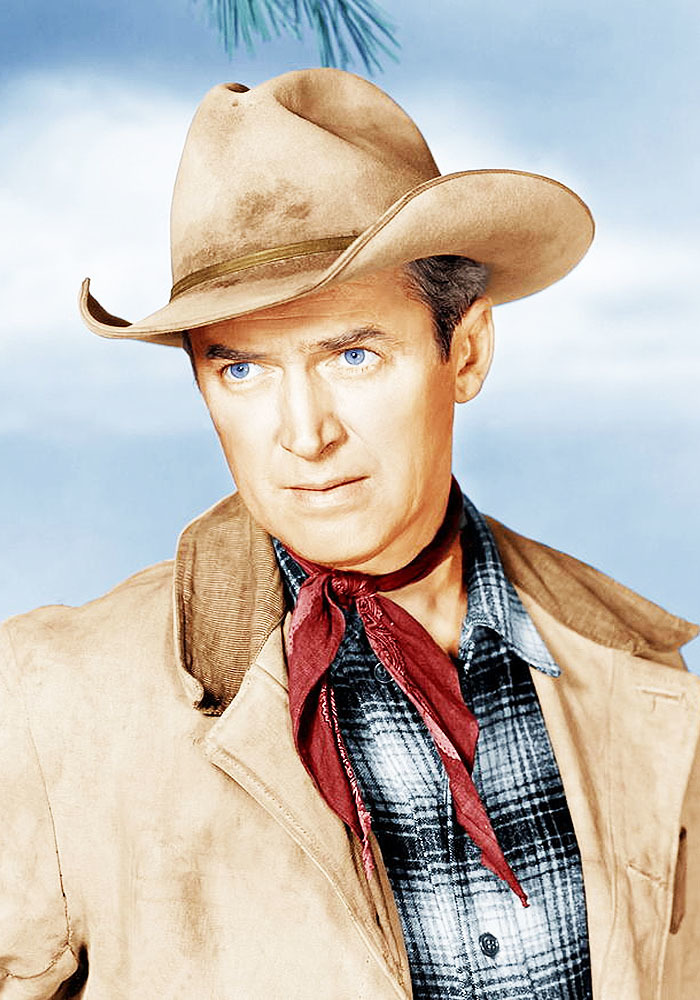 The Old Corral: Hats Off to the Stetson

There are three main ways to distinguish a cowboy: his horse, his gun and his hat. On foot in town, the gun and hat are still there; even if there's a gun ordinance in town and he has no pistol on his hip, in the saloon for example, you'll never separate him from his hat. When it all comes down to it, it's the hat that makes the cowboy.

He wears it out of doors, indoors and in some movies, in the bath.

All Western stars knew this. It was why, when they got a hat they liked that suited and fit them, they hung onto it through picture after picture.

Charlton Heston, talking about Will Penny:

'Hats are very important. I used that hat in about four Westerns. Then someone stole it on me. Wish I could find him. I'd kill him. You get a good hat, you gotta hang on to it.'

Naturally there were many hatters in the West and many brands of hat, but of them all the Stetson claims pride of place. To many people, 'Stetson' and 'cowboy hat' are synonymous. While panning for gold in Colorado in the 1860s, John B. Stetson created a hard-wearing hat for himself made from thick beaver felt. Although he wore it first as a joke, Stetson soon grew fond of the hat for its ability to protect him from the elements. Its wide brim protected him from the weather and the high crown kept an insulating pocket of air on the head. (He even used it to carry water.) I do too; when walking my dog Wyatt on a hot day I carry a bottle of water and give him a drink out of my hat.

The legend tells that a cowboy saw Stetson and his unusual hat, rode up, tried the hat on for himself, and paid Stetson for it with a five-dollar gold piece, riding off with the first Western Stetson hat on his head. Stetson went into the hat business and the rest is history.

Stetson made hats for the Texas Rangers, the US Cavalry and those famous ones for the Canadian Mounties.

Everyone wore a hat in the nineteenth century; the only question was which. In reality, of course, Westerners didn't only wear Stetsons. You might think they did if you are a keen follower of Hollywood movies but in fact you'd be just as likely to see Bat Masterson or Wyatt Earp in a derby or a top hat as a Stetson. Those wide-brimmed affairs weren't really for town use. The writer and photographer Lucius Beebe called the bowler 'the hat that won the West.'

James Stewart was as fond of his hat as he was of his horse Pie. His was a pretty beat-up, sweat-stained affair, a sorry-looking item to be sure. But it suited him perfectly and was part of Stewart as a Western star. When he abandoned it in Shenandoah, it ruined the film. (Not really).

Some screen cowboys became attached to different brands of hat. Think of that great Western actor Glenn Ford: he wore a Jaxonbilt that became recognizable as 'his' hat. See it in Jubal, or any of the many Westerns he starred in. So did Tex Ritter, and singer Don Williams still does.

Clearly the classic wide-brimmed cowboy hat was influenced by the Mexican sombrero. A high crown gave insulation and a broad brim gave shade. If you look at a picture like The Avenger, with Buck Jones, you can see the cross-over Mexican/cowboy effect.

Hats followed fashion and developed. Think of those huge ten-gallon affairs worn by the cowboys of the silver screen in the 1920s, right through into the '40s. Some of them were plain silly, but the actors felt obliged to wear them. Look at Tim McCoy in Frontier Crusader, for example. Later on Stetsons became more restrained. It was so noticeable that in the 1960s brims got smaller and more curled, like Horst Buchholz as Chico in The Magnificent Seven.

The crease became important because they gave hats individual character. Creases and dents make it easier to put on or remove the hat by grabbing it by the crown rather than the brim. A very popular crease used on cowboy hats is the Cattlemen, creased straight down the center of the crown with a dent on each side. Then there's the Carlsbad crease, now often called a 'Gus crease' after the character Gus McCrae in Lonesome Dove that keeps a high crown at the back, with the crease sloping steeply toward the front. Or you might favor the rodeo crease, the bull rider's crease, the quarter horse crease, or the Tycoon, with a pinched front.

Inside the cowboy hat you see a little ribbon bow in memory of past hatters who developed brain damage from treating felt with mercury, which gave rise to the expression 'Mad as a hatter.' The bow on the inside hatband at the rear of the hat is supposed to resemble a skull and crossbones.

Of course there is the old cliche about the good guys wearing white hats and the baddies wearing black. It's still trotted out today and you can still identify a villain by calling him a 'black hat.' Hopalong Cassidy dressed in black and he was no baddy. Perish the thought. Tom Mix appeared in black hats quite often. Black hats simply improved contrast in black & white movies.

The color was down to personal preference, not goodness or badness. Silverbelly (or gray) hats look better on people with ruddy complexions, like John Wayne. 'Black hats make me look beet red or deathly pale,' said Duke. 'My Silverbelly makes me look normal.' Duke often wore a Resistol.

Sometimes hats play a key part in the film. Think of the much mocked low-crowned topper of James Caan in El Dorado. In Wild Bill there is a running gag about touching the hat. You don't touch a man's hat. That's what causes most of the gunplay. As Lyle Lovett sang, 'You can have my girl but don't touch my hat.' If you listen to the song Stag O' Lee (try the Bob Dylan version) you will understand that taking another man's Stetson is a shootin' matter.