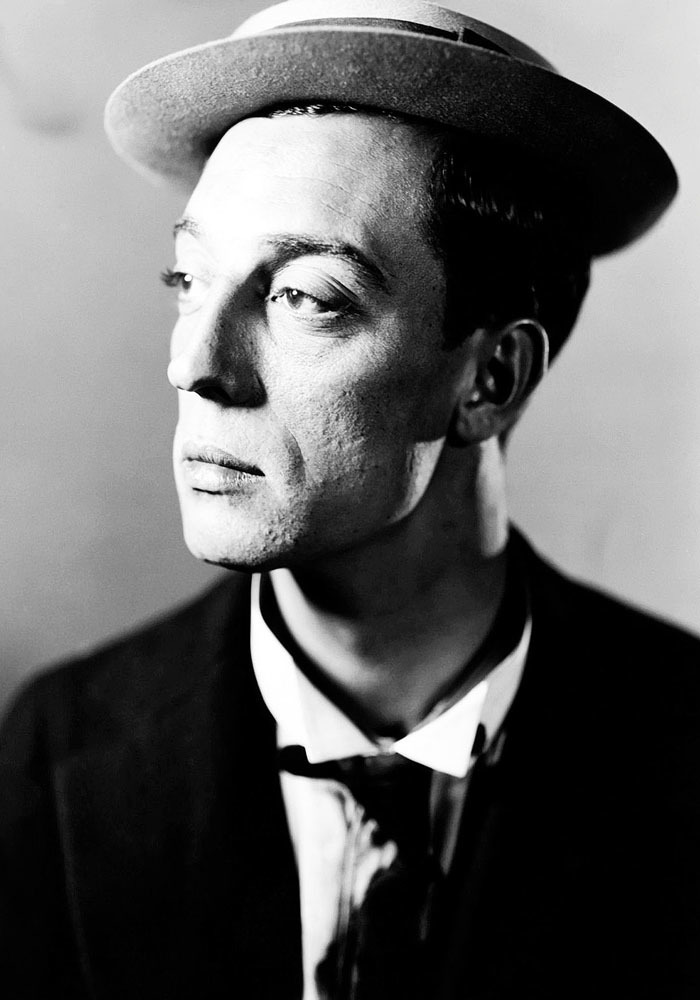 After the success of their Buster Keaton shorts set last year, Kino Lorber and Lobster Films have joined forces to release Keaton's features on DVD and Blu-ray. I was thrilled to receive copies of the films and am eager to share some of the goodies included in these releases.

The films are packaged as two-disc sets with one feature on each disc. The General comes with Three Ages, Keaton's very first feature, and Steamboat Bill, Jr. comes with College. While very similar to Kino's previous Keaton releases, there are a few differences in prints, scores and included extras.

All four films are presented in black and white (no color tinting) and are new 2K restorations from Lobster Films. The image quality is quite lovely.

For The General we get our choice of orchestral scores; Robert Israel's is lush and romantic (his trademark, really) while Joe Hisaishi's is a bit more on the playful side. Both are excellent, though I think I slightly prefer the Hisaishi score. There are worse problems in the world than having to choose between lovely orchestral scores, eh? The disc also includes an audio commentary by film historians Michael Schlesinger and Stan Taffel. For Three Ages we get our choice of chamber scores -- the Mont Alto Motion Picture Orchestra and Robert Israel. Both are very traditional and romantic. Once again, absolutely no complaints from me, though I think I prefer the Israel score.

The General includes vintage intros by Orson Welles (12 minutes with clips of Keaton's short film days) and a two-minute intro featuring Gloria Swanson in a fierce outfit, plus an 11-minute short about the restoration of the General (the locomotive, not the film).

For Three Ages we get a vintage Alka-Seltzer commercial starring Keaton and a terrifying anthropomorphic plop-plop-fizz-fizz tablet and a six-minute Candid Camera segment in which Keaton baffles customers at a diner counter by dropping his watch into his soup and engaging in other goofy, slapsticky antics. The innocence of the practical joke is the key to its charm and Keaton seems to be having fun with it.

Three Ages also includes an excerpt (not sure how much was left out) of D.W. Griffith's goofy 1912 caveman melodrama, Man's Genesis, which might have helped inspire the caveman sequences in Three Ages. It's as bonkers as can be and the cast looks pretty ridiculous in their (for the time) skimpy skins and grass skirts, but one can easily imagine a young Keaton finding endless comedic possibilities with such a setup; Charlie Chaplin and the Keystone crew certainly did with His Prehistoric Past.

Steamboat Bill, Jr. is enthusiastically introduced in a four-minute featurette by Serge Bromberg of Lobster Films. He details Keaton's budgetary battles with producers and illustrates the history of the film's more famous gags. The second special feature is a vintage, nautical-themed Alka-Seltzer commercial starring Keaton as a captain with a head cold. That creepy anthropomorphic tablet mascot is back too. Brrr! If you ever said to yourself, 'I love Buster Keaton but how can I find footage of him interacting with living, singing medicine tablets?' then this commercial is for you!

College includes two intros, one from Serge Bromberg again and the other a vintage recording of Lillian Gish. Next, John Bengston presents one of his excellent Silent Echoes research projects and discusses the locations used in College in a ten-minute featurette that includes maps, vintage photographs and other clues that is fascinating and informative. The disc is finished out with a half-hour 1966 short called The Scribe, Keaton's last screen performance, and Run Girl Run, an 18-minute 1928 college comedy from Mack Sennett's comedy studio starring an unknown named Carole Lombard. The Sennett film is not very funny but there are lots of shots of Carole in short shorts, if that's your bottle of pop.

Kino Lorber's Buster Keaton Blu-rays are just about as much fun you can have and still not be hauled off to jail. In addition to quality visuals and music, they feature some fun extras and a chance to enjoy some of Keaton's mid-century activities.