Newly transferred from original 35mm elements, and virtually unseen for over 60 years, we're proud to announce Blondie - The Complete 1957 Television Series will make its home video debut on DVD this September 18th.

Retail price is $39.99 for the 4-DVD set which contains all 26 sparklingly sharp episodes of this wonderful family sitcom starring Arthur Lake as Dagwood and Pamela Britton as Blondie.

Also, any copy pre-ordered at ClassicFlix.com will be autographed by Stuffy Singer, who played Alexander on the series (full biography below). 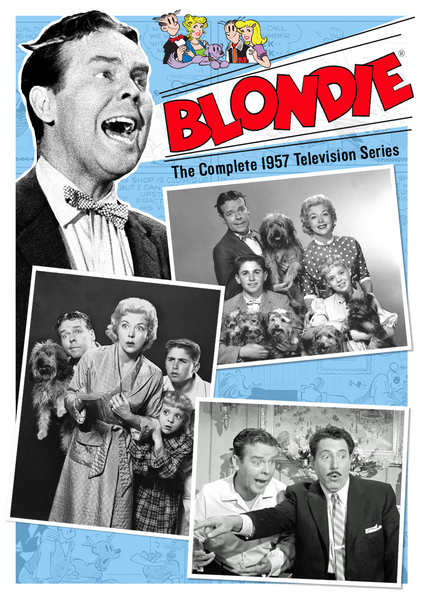 Newly transferred from original 35mm elements, and virtually unseen for over 60 years, Blondie - The Complete 1957 Television Series makes its home video debut with all 26 sparklingly sharp episodes in this 4-disc DVD set.

Still read today in over 2,000 newspapers across 55 countries, cartoonist Chic Young brought carefree flapper Blondie Boopadoop and her boyfriend Dagwood Bumstead to “the funny papers” in 1930. But it wasn’t until the two of them tied the knot three years later that Blondie became one of the most popular comics in the history of the medium.

The success of the strip spawned one of the longest-running franchises in the Golden Age of Cinema with 28 features produced by Columbia between 1938 and 1950 -- all starring Penny Singleton as Blondie and Arthur Lake as Dagwood. In 1957, legendary Hal Roach Studios brought the comic strip couple to the small screen with Pamela Britton as Blondie and Lake reprising his role as Dagwood… a role he seemed born to play.

As an entertainer, Stuffy Singer continues to perform radio and stage readings of famous television, film and radio shows of the 40s and 50s in which he appeared. His most recent tour included the celebration of Lucille Ball’s 100th birthday, where he appeared in readings of some of the iconic episodes of I Love Lucy. In 2011-2017, he performed in Seattle, Washington with the Radio Enthusiasts of Puget Sound, in New Jersey with Friends of Old Time Radio and in Los Angeles with the Society to Preserve and Encourage Radio Drama Variety and Comedy, and ithe Motion Picture Retirement Home.

In all, Singer has performed in more than 2000 movie, radio and television shows combined including co-staring rules in 4 separate TV series — Blondie, The Beulah Show, Sandy Dreams (the first weekly scripted TV show on the west coast) and its successor Fantastic Studios Inc. In addition, he made multiple appearances on different network series including The Jack Benny Show, and toured with Bob Hope.