ZaSu Pitts and Slim Summerville, anti-Nazi wartime comedies and the CineColor produced The Fabulous Joe are making their way to DVD in one special collection this October 13th from ClassicFlix in The Complete Hal Roach Streamliners Collection, Volume 5 (Pitts & Summerville Plus Other Rarities).

Culled from original studio masters, the 5-film collection features the reuniting of the popular 1930s comedy team of Pitts and Summerville in Niagara Falls and Miss Polly (both 1941), two wartime comedies poking fun at the Axis powers, The Devil With Hitler (1942) and Nazty Nuisance (1943), and the rarely seen The Fabulous Joe (1947) starring Walter Abel as a henpecked husband who inherits a talking dog. 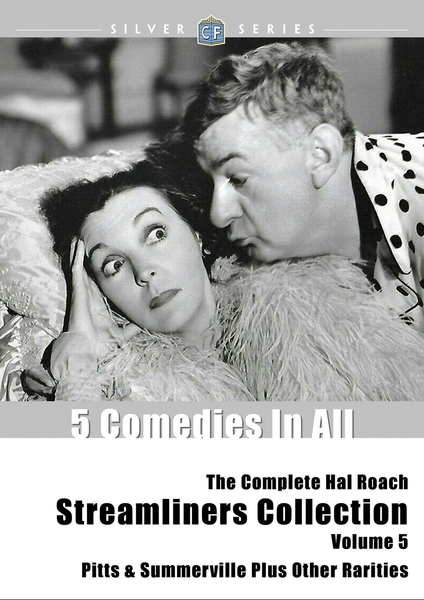 Pitts and Summerville, anti-Nazi wartime comedies and the CineColor produced The Fabulous Joe make up this special fifth volume of Hal Roach streamliners from ClassicFlix—with each film culled from original studio masters!

Hal Roach’s innovative format known as “streamliners” debuted in September of 1941 with the military comedy Tanks a Million. For his second streamliner the following month, Roach decided to re-team veteran comic actors ZaSu Pitts and George “Slim” Summerville in Niagara Falls, a comedy that recaptured the flavor of the duo’s popular 30s Universal vehicles like They Had to Get Married (1932). Their quick and equally riotous follow-up to Niagara was Miss Polly (1941).

Later in the streamliner series, Roach decided to mock the wartime Axis powers in a pair of spoofs featuring actor Bobby Watson (then the go-to performer anytime a picture featuring Adolf Hitler was in production). Watson played Der Fuehrer in The Devil with Hitler (1942) with Joe Devlin lampooning Benito Mussolini and George E. Stone doing a Japanese act. In 1943, Roach brought Watson and Devlin back as Adolf and Benito for Nazty Nuisance, but replaced Stone with a true Hal Roach veteran, Johnny Arthur.

Finally, after a hiatus from his streamliners from 1944 - 46, Roach returned in 1947 with four more on the production schedule. One of the four has been locked away for decades and largely unseen: The Fabulous Joe. Starring Walter Abel as a henpecked husband who inherits a talking dog, Joe has been exclusively remastered from a 35mm print for this set and is presented here for the first time in all its true CineColor goodness.

Niagara Falls (1941, 43 min.)
After waiting 20 years to marry, Sam and Emmy finally get hitched. But while at Niagara Falls, Sam mistakes a bickering young couple as newlyweds and shows more interest in their “honeymoon” than his own.

A popular comedy team at Universal in the early 30s, ZaSu Pitts and Slim Summerville are reunited and star alongside Tom Brown and Marjorie Woodworth in this merry-go-round of laughs. Also featured are Chester Clute, Edward Gargan, Rand Brooks and Hal Roach’s daughter Margaret.

Miss Polly (1941, 43 min.)
Old maid Miss Polly and handyman Slim are intent on seeing love blossom in the town of Midville: a burg locked down so tight by the Victorian-minded civic league that there hasn’t been a marriage ceremony performed in the city for the last two years.

Slapstick fun abounds in this quick follow-up to Niagara Falls, with the comedy team of Pitts and Summerville firing on all cylinders. Along for the ride are Kathleen Howard, Elyse Knox, Brenda Forbes and Mickey Daniels.

The Devil With Hitler (1942, 43 min.)
With unprecedented evil occurring above ground at the hands of Adolph Hitler, business is slow for the underworld -- so slow, in fact, that the board of directors wants to replace the Devil with Hitler.

Nazty Nuisance (1943, 43 min.)
Arriving on the Island of Norum, Hitler’s plans to secure a treaty are thwarted by a group of stranded American sailors.

The Fabulous Joe (1947, 59 min.)
When henpecked husband Milo Terkel inherits a talking dog, his life and household are turned upside down.