International Lady (1941) will be making its Blu-ray and DVD debut this September 21st.

Directed by Tim Whelan (The Thief of Bagdad), the World War II spy thriller stars George Brent, Ilona Massey and Basil Rathbone, and is the first Blu-ray release on the ClassicFlix Silver Series Line, and the 15th overall. 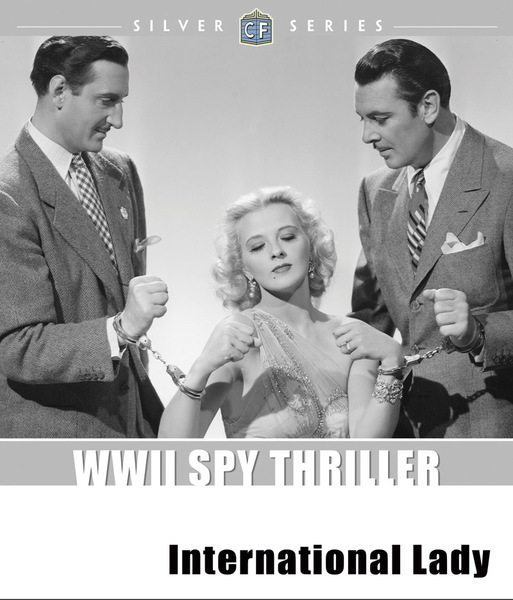 With Britain in the thick of World War II, and America on the verge, air power is vital to the cause of freedom. But when a ring of saboteurs is thought to be interfering with the flow of American airplanes to the U.K., FBI agent Tim Hanley (George Brent) and his Scotland Yard counterpart Reggie Oliver (Basil Rathbone) are called upon to work together to expose the Nazi threat to liberty.

Hanley and Oliver's suspicions soon fall upon Carla Nillson (Ilona Massey), a stunningly beautiful singer who is believed to be the principal agent responsible for passing along vital Allied secrets to the Axis “higher-ups”. As he trails Carla from London to Lisbon, and then to New York, Tim desperately wants to believe in her innocence… particularly since he's fallen in love!

A crackerjack yarn of espionage and amour, International Lady (1941) spotlights three captivating performances by its star trio of George Brent, Ilona Massey and Basil Rathbone—with the banter between Brent’s Hanley and Rathbone’s Oliver providing an occasional lighter touch along the way.