Our previous 2018 release of Raw Deal (Special Edition) is coming back in print this July 26th.

Anthony Mann's essential film noir was photographed by John Alton and stars Dennis O'Keefe, Claire Trevor and Marsha Hunt. Having undergone a major restoration with over 400 man hours spent to produce a top-notch image, the presentation is complimented by equally impressive bonus features (see below). 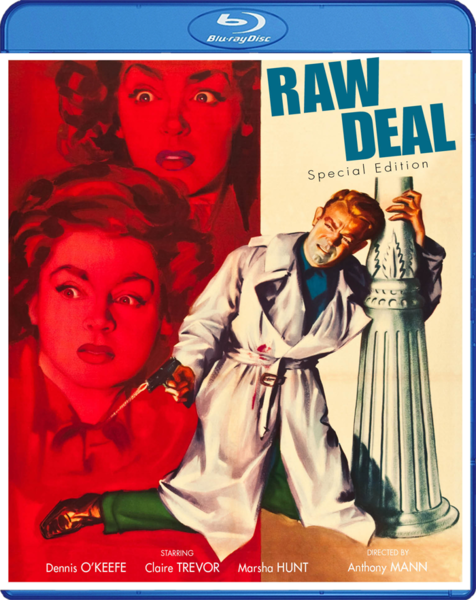 All Joe Sullivan wants is “a breath of fresh air.” But when you’re serving time in stir for robbery, fresh air is a rare commodity. That’s about to change though as mob boss Rick Coyle has greased the skids inside the prison walls, so Joe can make it outside where girlfriend Pat will be waiting.

But things don’t exactly go as planned for the duo as car trouble during their getaway forces them to get help from the only person nearby -- strait-laced legal assistant Ann Martin, whom they kidnap and use to evade capture. Things aren’t going as planned for Rick either who set up the escape fully expecting the fugitive to get “cut down” so he could keep the $50,000 he owes Joe for taking the rap for him.

Now past the dragnet, the trio each find themselves increasingly conflicted in their loyalties and core beliefs as Joe is torn between the two women, who both care for him, while Pat and Ann each make decisions that prove they’re not as bad, or as good, as they’re supposed to be.

Raw Deal presents the moviemaking team of director Anthony Mann and cinematographer John Alton at the peak of their success (fresh off their box office smash T-Men), offering dark, moody atmosphere filled with fog-shrouded landscapes and characters who are no strangers to the “left-handed endeavor” of crime. Scenarist John C. Higgins (He Walked by Night) and co-writer Leopold Atlas offer a taut, suspenseful tale of one man’s desperate bid for freedom and the two women who love him.