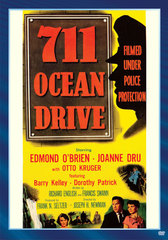 Electronics whiz Mal Granger (Edmond O’Brien) is gainfully employed by the local telephone company, but even as a single man it's hard for him to make ends meet. That's why Granger plays the ponies in his spare time, and when his bookie Chippie Evans (Sammy White) makes the rounds at his place of business to pay off other participating employees (and take a few more bets), he asks Evans for a little extended credit. (He also lays down a bet for Mal in the next race as well.)

Chippie has the solution for Mal's insolvency: he drives his pal to the offices of Liberty Finance, a front for the Tri-State Wire Service run by mobster Vince Walters (Barry Kelley). Chippie proposes to Vince that he hire Mal to renovate his business; with Mal's expertise, Tri-State can adapt to twentieth century tech advances and handle even more business from the bookmakers (who pay Vince a substantial fee for the use of the service) and that will put even more money in Walters' pocket. Vince offers Mal 50 a week to renovate his operation, and soon it's goodbye to Ma Bell.

There's no dampening the fire that is Mal's ambition: he starts to angle for a larger slice of the pie (twenty percent), and eventually he's able to get what he wants when he has Vince over a barrel ('I've got him by the short hairs right now,' Mal tells Chippie in a bit of dialogue that somehow sneaked past the censors). Furthermore, Mal gets control over the entirety of Tri-State when Vince is shot and killed by a disgruntled bookie. With Mal virtually in charge of all bookmaking in California, his operation starts to attract the notice of the National Wire Service -- affectionately known on the East Coast as 'the Syndicate.' Mob boss Carl Stephans (Otto Kruger) sends his lieutenant Larry Mason (Don Porter) out West to negotiate with Mal, who expresses disinterest at first. But Granger finds himself attracted to Larry's wife Gail (Joanne Dru), and agrees to a 50-50 arrangement that soon -- thanks to the sharp auditing of Mal's bookkeeper, Trudy Maxwell (Dorothy Patrick) -- reveals Mal's take is actually 30-70.

711 Ocean Drive (1950) is an example of what fans of the film style call 'docu-noir.' It's a tale told in flashback; the movie begins with Lt. Pete Wright (Howard St. John) and his partner (Jay Barney) in pursuit of Granger's car, just outside of Las Vegas, in their capacity as members of the Gangster Squad. (Yes, it was difficult for me to keep a straight face when I saw 'Gangster Squad' imprinted on a door that is shown shortly after the credits.) The movie does not hold back on the heavy-handed moralizing, heard via voiceover at the close when a concerned narrator warns us about the perils of dropping a couple of bucks on horse races. Drive also includes this bit of helpful background info before the opening titles roll: 'Because of the disclosures made in this film, powerful underworld interests tried to halt production with threats of violence and reprisal. It was only through the armed protection provided by members of the Police Department in the locales where the picture was filmed that this story was able to reach the screen. To these men, and to the U.S. Rangers at Boulder Dam, we are deeply grateful.' (See, this is why we can't have nice things.)

The mention of Boulder Dam is significant since, like the set pieces in movies such as Saboteur (the Statue of Liberty) and The Naked City (the Williamsburg Bridge), the exciting climax of Ocean Drive takes place at the famous landmark (it's still referred to 'Boulder' even though it had been changed back to 'Hoover' by the time of the movie's release), offering a wry commentary on the insignificance of Granger's pitiless attempt to flee the authorities. Although director Joseph M. Newman and producer Frank Seltzer did do preliminary shooting at the dam and in and around Las Vegas, Seltzer later told a Senate committee holding hearings on organized crime that several Vegas gamblers persuaded him to stop the location shooting due to Drive's subject matter (this advice wound up costing the independent producer 7,000 to build reproductions of the Hoover Dam areas in which the company was dissuaded not to shoot--despite the fact that the dam was government property).

Despite the Sunday school lessons of 711 Ocean Drive, it's a pretty solid melodrama that has the good sense to feature noir icon Edmond O'Brien at its core. (Around Rancho Yesteryear, I refer to the actor as 'the sweatiest man in noir' because whenever the noose starts to tighten in these types of films, Eddie perspires just like Albert Brooks' Aaron Altman in that hilarious scene from Broadcast News.) O'Brien's Mal Granger is a decent sort; maybe a bit full of himself but he has a sense of humor ('I just wish I could lay my hands on Don Ameche for a while...I'd teach him not to invent the telephone,' Mal tells a co-worker in Example #753 of a successful Story of Alexander Graham Bell gag.) -- but like all tragic noir protagonists, Granger makes the mistake of dabbling in a criminal enterprise with the initial purpose of just picking up a few extra bucks. As he becomes more and more involved in Walters' operation, Mal is seduced by the staggering amount of money the perfectly legitimate (according to the laws on the books) wire service takes in...allowing him to enjoy a life of ease and plenty he never thought possible. (There's a telling moment in Drive when Mal, after leaving Wright's office where he's been subjected to an intense grilling, reaches into his pocket for his old phone company I.D. badge. He stares at it for a moment, then chucks it away in disgust. The audience then assumes he won't be reapplying anytime soon.)

Joanne Dru plays the object of O'Brien's affection...and though she has some interesting scenes when she's first introduced in Drive (Gail's a flirtatious drunk who's earned the enmity of her mobster husband due to her playful behavior) she eventually takes a back seat to the movie's race-to-the-climax narrative, which has O'Brien's character soliciting the services of a hit man (Robert Osterloh) to rub out Gail's hubby (what can I say -- Mal loves her, the big lug!). Speaking of Larry Mason, he's played by character veteran Don Porter -- who folks my age remember as Gidget's dad on the 1960s TV series...and folks even older will recognize as Ann Sothern's boss on both her self-titled sitcom and Private Secretary. Porter's gangster is a vicious piece of work (he gives his wife a beatdown at one point during the movie, and alibis to O'Brien that 'she fell down the stairs') and I don't think I've seen many movies where Don plays the bad guy save for Who Done It? (1942) and his finest on-screen performance, incumbent U.S. Senator Crocker Jarmon in the 1972 political satire The Candidate.

I also enjoyed Otto Kruger's turn in 711 Ocean Drive as the urbane mob boss whose suavity masks a ruthlessness that's played for giggles...since his Carl Stephans is incapable of digesting anything stronger than milk due to a persistent ulcer. ('If I hadn't picked up this duodenal worrying about our affairs, I'd be able to eat like a man instead of a kitten.') Bert Freed plays one of Kruger/Porter's associates, Walter Sande a garage mechanic who provides St. John's Wright with vital information on O'Brien, and Cleo Moore can be glimpsed as Ed's platinum blonde date in an early restaurant scene. While I think the script by Richard English and Francis Swann could have been pared back a little (Drive is overlong at 102 minutes), the movie is a first-rate sleeper that delivers the goods. Kudos to cinematographer Franz Planer for his stunning photography; the five-time Oscar-nominated Planer also worked on such noirs as Champion (1949), Criss Cross (1949) and 99 River Street (1953).