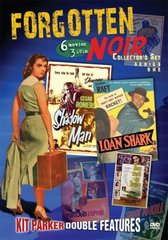 Where's That Been? - Portland Exposé / They Were So Young

There's a famous catchphrase once used by Supreme Court Justice Potter Stewart to describe the concept of 'obscenity' when he found himself unable to delineate it by a clinical definition: 'I know it when I see it.' I'm convinced that same phrase is used by home video entities when they classify a movie as 'noir;' once defined as a film style that met strict parameters in terms of lighting, plot, themes, etc., the term 'noir' now seems flexible enough to classify any feature film with a crime background. One man's noir is another man's police melodrama, it would seem. Personally, I think the tent is big enough to encompass a wide range of crime films without getting bogged down in a tedious debate.

Case in point: VCI Entertainment has released several volumes of B-movies under the banner of 'Forgotten Noir' -- many of these obscure titles occupied space in the Kit Parker Films library over the decades, and probably wouldn't have seen the light of day had VCI not seen fit to slap them on DVD. Volume 1 of Forgotten Noir features a pair of 'dark city' candidates in Portland Expose (1957) and They Were So Young.

In Portland Expose, an Oregon businessman named George Madison (Edward Binns) -- whose 'Woodland Tavern' may be a honky-tonk, but it's a family-run honky-tonk. That is until two representatives from The Syndicate, Garnell (Lawrence Dobkin) and Jackman (Russ Conway), send a pair of goons (Joseph Marr, Frank Gorshin) out to Madison's to lean on him, suggesting that adding a few slot machines (that are rigged) and free-flowing liquor might make his saloon a bit more convivial. Madison gallantly tries to resist The Syndicate's advances, but when the henchies threaten to mar the pretty face of his daughter Ruth (Carolyn Craig) with acid he becomes convinced maybe a few pinball machines would spruce the place up a bit.

George's wife Clara (Virginia Gregg) isn't at all pleased that the Woodland, while certainly profitable, is becoming a den of sin and iniquity, and George himself has had enough when Ruth is attacked by a sociopathic reprobate in Henchman Joe (Gorshin). Madison can't get any help from the cops (since they're all on the take), and so he takes his problem to a union official named Alfred Grey (Francis De Sales). Wearing a 'wire,' George manages to infiltrate The Syndicate and gather enough evidence on the operation to make sure everybody involved spends several years in the Grey Bar B&B, with the city of Portland never fearing the iron grip of corruption again.

In real life, the squelching of Portland's sleaze got a bit of an assist from Oregon Senator John McClellan, who exposed the parties involved in a series of Senate Permanent Subcommittee Investigation hearings held shortly before the movie's release. The 'ripped from the headlines' plot gives Expose its 'docu-noir' bona fides, and the film itself is quite reminiscent of The Phenix City Story (1955). Much of Expose was filmed on location in Portland, which created some friction where the Teamsters were concerned -- they objected to the depiction of labor's complicity with organized crime in Jack DeWitt's screenplay. (The producers had to rent film equipment in California, then ship it in non-Teamster trucks to its Portland destination.)

I found Expose a bit stagnant in parts (though it could be because I've seen Phenix City, which is a superior film), but the lackluster direction from Harold D. Schuster is compensated by some impressive acting turns by the movie's cast. Edward Binns gets top billing, something quite rare for a character veteran best known for his supporting performances in several of Sidney Lumet's films (12 Angry Men, Fail-Safe, The Verdict), and I also enjoyed seeing so many old-time radio veterans in the movie, notably Larry Dobkin and Virginia Gregg. (Not to mention Francis De Sales and Larry Thor, playing a crooked cop.) Frank Gorshin, a.k.a. The Riddler on Batman, is creepy as the henchman with a fetish for jail bait, and McHale's Navy's Joe Flynn is uncredited as one of the union guys who solicits Binns' help.

They Were So Young serves up its plot with a nice dose of Brazilian white slavery; a young woman named Eve Ullmann (Johanna Matz) arrives in Rio de Janeiro along with several other young models after answering a newspaper ad, and is housed in a sumptuous villa run by a sinister woman named Madame Lansowa (Gisela Fackeldey). At a fashion show arranged by Lansowa, Eve is asked to spend time in the company of tycoon Jaime Coltos (Raymond Burr) and his employee, an American mining engineer named Richard Lanning (Scott Brady). Lanning gets a little too familiar with Eve, who cools his romantic ardor by cracking a water bottle across his cranium.

The next morning, Eve and another woman named Connie Voorhees (Ingrid Stenn) head into town to report the activities going on at Lansowa and Company, but the authorities prove most unresponsive. Much of this has to do with the fact that none of the other women in the villa want to file complaints, and Connie herself clams up after being waylaid by several goons on her way to the Dutch Consulate to expose Lansowa as well. Eve's dilemma: Lansowa's outfit has her passport and work papers, so she's pretty much a prisoner in the villa unless she walks away...to certain arrest for not having the proper papers, don't you know. Her only hope is to enlist the help of Lanning; hopefully he's over that whole water bottle incident by now.

Directed (as well as produced and co-written) by B-movie maven Kurt Neumann (best known for 1958's The Fly and a previous 'Where's That Been?' entry, The Ring), They Were So Young was a West German film release originally titled Mannequins fur Rio. The Production Code in this country had a rather tepid response to the whole trafficking women plot, and insisted scenes be added to emphasize more of a racketeering angle -- fortunately, it's the original version of the movie that's on the Forgotten Noir, Vol. 1 DVD. To be honest, were it not for the participation of Raymond Burr --; here at his slimy best whose 'respectable businessman' facade is a blind for his real activities (and they're all vile, Bubie) -- Young would probably still be languishing in a vault somewhere. Burr's solid noir credentials in films like Raw Deal (1948) and Pitfall (1948) make him a most welcome presence in this movie.

But Scott Brady, younger brother of film noir icon Lawrence Tierney, was no slouch when it came to dark city cinema, either (Canon City, He Walked by Night), and unlike some critics of They Were So Young I think he does pretty well here: making for a rather engaging hero, and demonstrating a cute chemistry with leading lady Johanna Matz. This just might be the only movie Matz appeared in that got a showing on these shores; the bulk of her movie and television work is German in origin, and in fact the only other thespian I recognized from this movie was Gert Frobe (the titular villain of Goldfinger), who plays a small role.

I'd probably give They Were So Young the edge as far as enjoyment goes (the exotic Brazilian background adds a little kick to a very suspenseful story) but that's not to discount the pleasures of Portland Expose, with its twisted take on picture-postcard America in the 1950s. Both movies tell their respective tales quickly, and in that beloved programmer style that will make noir fans ask 'Where's that been?'