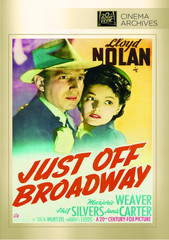 Where's That Been? - Just Off Broadway

Lillian Hubbard (Janis Carter) is on trial for the murder of her fiance, Harley Forsythe, and a positive outcome does not bode well. There's been damning testimony from nightclub chanteuse Rita Darling (Joan Valerie) placing Lil at the scene of the killing, and additional input from Henry Randolph (Leyland Hodgson), a butler employed at a residence near Lillian's apartment who bears witness that her movements match precisely the time frame of Forsythe's murder. The tension in the courtroom is so palpable that an unknown assailant throws a knife at Randolph while he's still on the stand!

Fortunately for Lillian, she's going to get some help in establishing her innocence. One of the jurors on her case is none other than private investigator Michael Shayne (Lloyd Nolan) -- who's not only convinced she didn't do it, he manages to hide the knife used to kill Randolph under a table during the courtroom commotion. Shayne is taking a big chance, you understand -- there are rules about jurors investigating these sorts of crimes on their own, particularly when they're serving on a sequestered jury. With the help (or hindrance, depending on your point of view) of newspaper reporter Judy Taylor (Marjorie Weaver), our hero risks almost certain contempt of court charges to track down Forsythe's killer.

Nolan would star in seven Michael Shayne films for Fox between 1940 and 1942, and of those programmers, five have been released to DVD: Private Detective, Sleepers West (1941), Blue, White and Perfect (1942) and The Man Who Wouldn't Die (1942) are available in the box set The Michael Shayne, Private Detective Collection: Volume 1 while 1941's Dressed to Kill was made available as a standalone disc. Fox's Cinema Archives has just released Just Off Broadway (1942) to MOD DVD (the plot of which I described in the first two paragraphs), and it may be just a matter of time before the last of the missing-on-home-video Shaynes, Time to Kill (1942), makes its DVD debut as well. (Kill is based on Raymond Chandler's Philip Marlowe novel The High Window -- which was remade by Fox in 1947 as The Brasher Doubloon, if you're curious to check it out on disc.)

With the 1939 publication of Dividend on Death, a mystery novel penned by Davis Dresser (writing as Brett Halliday), 20th-Century Fox expressed an interest in bringing the detective protagonist of that book, Michael Shayne, to the silver screen. The studio even had the perfect actor in mind: Lloyd Nolan, who had just signed a contract with Fox and would be with them for three years, so Fox naturally wanted to use him whenever they could. Under Sol M. Wurtzel -- the man in charge of the studio's B-picture wing (which had already put into production successful franchises in detectives Charlie Chan and Mr. Moto) -- Fox adapted Halliday's The Private Practice of Michael Shayne to the big screen as Michael Shayne, Private Detective (1940).

With the exception of the first film in the franchise, Fox's Michael Shayne series didn't depend much on the Dresser-penned novels for inspiration and Just Off Broadway continues the tradition, with an original screenplay by Arnaud d'Usseau (from an idea by Jo Eisinger). The conventional wisdom is the studio wanted the Shayne character in films to be unattached and available to 'play the field...' which is why it's not mentioned the Phyllis Brighton character from Michael Shayne, Private Detective was in fact Shayne's steady girlfriend (and later wife in the novels). (There's further speculation that Dresser killed off Mrs. Shayne so the studio would give his future books serious consideration for silver screen adapting.)

The Michael Shayne of Fox's film franchise had, to use a description by film noir historian Alain Silver, 'the charm of Nick Charles...without the money.' Actor Nolan seems at first an unlikely candidate to play a gumshoe, but he did very well with the Shayne series due to his charm and ability to keep it light -- without completely giving the game away. Just Off Broadway is a most entertaining entry; it mixes suspenseful mystery with just a soupcon of comedy -- and even though Broadway falters a bit at the end (Shayne is allowed to ask questions as a juror in order to reveal the guilty party; I suspect the judge at this trial is the same one who presided over a lot of Perry Mason's cases due to the leeway he gives the shamus) it wraps things up with a pretty amusing payoff.

Nolan's leading lady in Broadway is Marjorie Weaver -- this is her third Shayne outing, having played the previously mentioned Phyllis Brighton in Private Detective and essaying the role of Catherine Wolff in The Man Who Wouldn't Die. (Weaver also appears in a pair of the studio's Charlie Chan mysteries, Charlie Chan's Murder Cruise and Murder Over New York.) The treat for me in Broadway was seeing one of my favorite comedians, Phil Silvers ('Gladaseeya!'), as an enthusiastic shutterbug who, after recognizing Shayne as a juror, is determined to get a photo of him and land a most newsworthy story. Character veteran Chester Clute is on hand as Michael's fellow juror and roommate -- in order for Mike to sneak out of his sequestered hotel room, he obtains a couple of capsules from the sheriff on duty (played by Ken Christy, whose unmistakable voice was often heard as Chief Gates on radio's The Great Gildersleeve) and slips them to Clute who's draped in the welcome arms of Morpheus in no time.

Oh, and pay attention to the two men watching knife thrower Alexander Lockwood's act in the wings of the theater: the little man is Billy Curtis (best known as Clint Eastwood's sidekick in High Plains Drifter) and the tall comic is Hank Worden, veteran of many a John Ford film (he's 'Old Mose' in The Searchers, for example). Other familiar faces include Francis Pierlot, Oscar O'Shea, Ralph Dunn, Mae Marsh, Herbert Rawlinson and Tim Ryan (who has the misfortune of cracking an anti-Japanese joke, given the tenor of the times).

Four years after Fox brought the Shayne franchise to a close -- Lloyd Nolan went on to bigger 'A' pictures like Guadalcanal Diary (1943), A Tree Grows in Brooklyn (1945) and The House on 92nd Street (1945) -- PRC (Producers Releasing Corporation) grabbed the baton and cranked out five low-budget features between 1946 and 1947, whose only distinction was they starred future Leave it to Beaver dad Hugh Beaumont as Dresser's 'reckless, red-headed Irishman' (it's a good thing they made these movies in black-and-white since neither Beaumont nor Nolan had red hair). They don't come anywhere close to the lighthearted charm that's the hallmark of the Fox programmers; I can't help but chuckle at the note on the Shayne Collection set that reads 'the Michael Shayne films were an acclaimed addition to cinema's luscious noir genre at its magnificent height.' No, they really weren't acclaimed anything -- but they sure are fun to watch, and if you spend some time Just Off Broadway I think you'll agree.