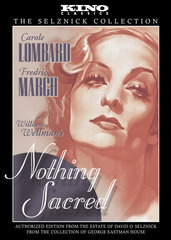 An unscrupulous reporter takes advantage of a tragic story to sell papers and manipulate the world -- sound familiar? This is a common tale, but it was seldom told with such comic flair as in 1937's Nothing Sacred. Starring Fredric March as the reporter and Carole Lombard as the heroine of his sad story, the movie deftly layers its screwball comedy with biting cynicism to take aim at newspapers more desperate for profit than truth, a public more interested in sensational tragedy than reality, and individuals wiling to sidestep decency in favor of ill-gotten perks.

The movie begins in a small town in Vermont. The local doctor diagnoses Hazel Flagg (Lombard) with fatal radium poisoning, and she only has a short time to live. Wally Cook (Fredric March) is an aggressive reporter in New York demoted when his 'African prince' story is revealed to be a hoax. He is desperate to regain his position and rushes to Vermont when he hears about poor Miss Flagg. He knows he can turn her tragedy into a paper-selling bonanza!

But the doctor was wrong: Hazel is actually in perfect health! Wally is undeterred by this shocking revelation and convinces Hazel to pretend she is still dying in exchange for a whirlwind trip to New York City. The small town girl longs for a bigger, more exciting life, so she goes along with the scheme. It's just a 'harmless' lie, after all?

Wally's tearjerking stories makes Hazel the toast of New York. The public is fascinated by the tragic beauty, and society comes out in full force to show her a wonderful time before her imminent death. People seem to enjoy dipping into Hazel's tragedy -- although Wally and Hazel are 'villains' for manipulating the world, the world's empty, voyeuristic sympathy is less than heroic.

Eventually, Hazel feels terrible for lying, and even cynical Wally starts to question his scheme. But how can they undo the giant web they've woven? With plenty of screwball nonsense, pratfalls, and one famous slugfest, of course!

Nothing Sacred was written by former reporter Ben Hecht after he read the short story 'Letter to the Editor' in Hearst's International-Cosmopolitan. David O. Selznick asked him to come up with a comedy for Lombard, and Nothing Sacred seemed perfect. Hecht was one of the pens behind Lombard's breakout role in Twentieth Century (1934) and he used his experience as a reporter to write The Front Page (1931), remade as a little movie called His Girl Friday (1940). Hecht infuses Nothing Sacred with his trademark snappy, quick dialogue and screwball sensibility.

But it wasn't an easy journey from script to screen. Hecht wanted the film to star his friend John Barrymore, but the actor was deep in the throes of alcoholism and struggled to complete his last few movies. Selznick wasn't going to take a chance with the actor, so he refused to cast him. Hecht remained on the project until Selznick asked him to craft a happy ending. He declined to sully his clever black comedy with a tacked-on, Hollywood finale, so he left the film. Selznick then called in four other screenwriters, including Dorothy Parker, to complete it.

As usual for a Lombard movie, production was an entertaining series of practical jokes. Lombard and March drove around the backlot in a fire truck during breaks, and Lombard convinced crew members to put director William Wellman in a straitjacket. Perhaps in exchange for that prank, Wellman personally 'helped' Lombard prepare for the fight scene with March! The joy and whimsy of the production comes through onscreen and makes what could be a rather bleak story crackle with delightful screwball energy.

Carole Lombard later said Nothing Sacred was one of her favorite films, and critics were generally positive. The New York Times called it 'one of the most entertaining' of the season, and Screenland agreed, writing it was one of the 'most provocative pictures to be seen these days.' The review added that the comedy is 'unselfconsciously ribald and unconventionally robust' and stands up to repeat viewings.

Nothing Sacred is also noteworthy as an early color film; one of the few screwball comedies in color -- since that genre flourished in the 1930s, few films used the relatively new and expensive Technicolor process. The movie also features the first montage and process effects in Technicolor. It was the first to incorporate rear screen projection and used footage filmed on location in New York, another rarity at the time. Nothing Sacred also holds the distinction of being Carole Lombard's only color movie. If you've never seen the blonde dynamo in glorious Technicolor, this is your chance!

Nearly two decades after its release, Nothing Sacred was turned into a Broadway musical called Hazel Flagg in 1953. A year later, Paramount adapted it to the screen as Living It Up starring Jerry Lewis in the Lombard role, Janet Leigh as the reporter, and Dean Martin as the doctor in a role that was considerably beefed up.