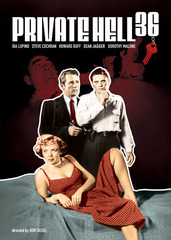 L.A. detective Cal Bruner (Steve Cochran) is in the right place and right time one evening when he foils a pharmacy robbery in progress and collars one of the thieves.  It’s revealed that the arrested man (King Donovan) has a fifty-dollar bill among the money that was stolen, which can be traced to a 50,000 heist that took place on the East Coast sometime before.  Bruner and partner Jack Farnham (Howard Duff) are then assigned by their superior, Captain Michaels (Dean Jagger), to follow the admittedly slim lead in an attempt to recover the missing money.

The half-a-yard (slang for a 50-dollar bill) is traced to Lilli Marlowe (Ida Lupino), a nightclub chanteuse who received the calf (more fifty dollar slang) as a tip from a customer; she agrees to accompany Bruner and Farnham on a stakeout at the local racetrack to see if she can identify her patron (he had told her that the fifty was a result of blessed luck on the ponies), and during the surveillance, Lilli and Cal begin to get a little chummy beyond the usual cop-civilian friendship.  When the two men get a break in the case after Lilli spots the suspect leaving the track, a furious chase results in the man’s car crashing down an embankment.

As a result of the crash, some of the missing 50,000 begins to scatter into the wind…and both Cal and Jack scurry to collect the cash.  The two men then find the box it was kept in, and Cal makes a withdrawal of 0,000 despite Jack’s protests.  Hiding the money in a trailer park in a unit marked #36 (the “private hell” of the film’s title), Cal plans to split the loot with his partner – convinced that no one will ask any questions.  It’s not as if Farnham can’t use the money – he’s finding it tough to provide for wife Francey (Dorothy Malone) and their baby daughter on a cop’s salary – but his guilt just might give the game away.

Private Hell 36 (1954) was one of the last films to be produced under the banner of “The Filmakers” – an independent company founded by actress-director Ida Lupino and her second husband, Collier Young.  The couple had already called it quits by the time Private Hell was released to theaters (amusingly, one of their collaborations, 1953’s The Bigamist, found Young working alongside ex-wife Lupino and then-wife Joan Fontaine) but in its short period of existence, The Filmakers would be responsible for a number of interesting issue-oriented movies and film noirs, notably Beware, My Lovely (1952) and the classic The Hitch-Hiker (1953).  (Two of Lupino’s early directorial efforts, Never Fear [1949] and Outrage [1950], were products of the organization that also went by “Filmakers Releasing Corporation.”)

Young and Lupino wrote the screenplay for this noir that examines a theme prevalent in other crime melodramas from that time period (The Prowler, Shield for Murder): the idea of dedicated public servants tempted into taking shortcuts to achieve the American Dream.  The character of Cal Bruner is a fairly dedicated, hard-working cop…but after spending time with Lilli Marlowe, whose eyes become as big as saucers when she notices a shiny diamond bracelet on the arm of a woman during the racetrack surveillance, he’s figured out that the only future he stands to have with Lilli is if he’s able to buy her pretty things.  The message of Private Hell is a conservative one: the weed of crime bears bitter fruit, and farmer Cal is due for a bout of crop failure.  Steve Cochran had made a name for himself in a number of crime dramas (his most notable role is that of “Big Ed Somers,” the hood who tries to take over Cody Jarrett’s [James Cagney] operation in White Heat [1949]) and his transformation from decent to dirty cop in Private Hell 36 is a mesmerizing one; I’m so used to seeing him as a rotter (The Damned Don’t Cry, Storm Warning) that I marveled at his sensitivity in Private Hell’s early sections.

If Cal Bruner has no qualms about greasing the skids to Easy Street, partner Jack Farnham is just sick about the notion – and his guilt-ridden demeanor is wonderfully conveyed by Howard Duff…Ida Lupino’s third husband.  Duff, whose noir credentials were established with films like Brute Force (1947) and The Naked City (1948) – not to mention starring as “the greatest private detective of them all” on radio’s The Adventures of Sam Spade – was an underrated actor who really turns in outstanding work in Private Hell.  Jack Farnham is the partner who clings to a sense of duty even though Bruner’s theft is clearly eating him up inside: he begins to drink heavily, and at one point is so wracked with guilt he refuses to allow his wife to bring their baby girl (played by Duff and Lupino’s real-life daughter Bridget) out of her room during a dinner party with Cal and Lilli in attendance (perhaps he’s concerned about her being tainted by Cal’s corruptive influence).  Jack may be the film’s designated good guy…but an earlier scene, the audience knows that Jack himself is not beyond temptation when he momentarily gets a faraway look in his eye as he and partner are gathering up the bills scattered by the car crash.

The character of Lilli Marlowe is similar to those played by Ida Lupino in previous noirs; she answers to “Petey Brown” in The Man I Love (1947) and “Lily Stevens” in Road House (1948)…but all three women have a common occupation: literally “singing for their supper” in nightclubs and gin joints in a husky baritone that suggests years of whiskey and smoke cut off all the high notes years ago.  Lilli’s been around the track a few times, and much of her dialogue is honed to the sharpest edge of sarcasm…you can’t really dismiss her as a gold-digger, however, because it’s Cochran’s character that takes the steering wheel in the relationship, promising her a life of ease of plenty.  She’s vulnerable enough to be swept up in Bruner’s big plans…and yet before the tragic climax, starts to have second thoughts (he’s promised to take her to Acapulco).

Of the twelve feature films produced by The Filmakers, Lupino directed or co-directed six of them.  She once remarked that if people thought of her as “the poor man’s Bette Davis” when it came to her acting skills, behind the camera she was “the poor man’s Don Siegel.”  So it’s interesting that Siegel himself held the reins on Private Hell 36, directing the feature with a let’s-get-down-to-business determination that really comes to life in several scenes, notably the drugstore robbery in the opening.  Siegel later described the Private Hell experience as soaked with alcohol and misery, which makes the viewer curious as to whether the initial scene that takes place at Lupino’s place of employment – Ida, Howard and Steve are surrounded by large displays of beer and booze during their conversation – was Siegel’s subtle commentary on the shoot.  (There’s another amusing in-joke in that the bar’s proprietor is played by character great Jerry Hausner; he’s best remembered as “Jerry the agent” on I Love Lucy but some old-time radio fans know that he appeared occasionally on Duff’s Sam Spade as Spade’s lawyer, Sid Weiss.)

Siegel’s dialogue director on Private Hell 36 was David Peckinpah – you know him as Sam Peckinpah, the director of later movies like Ride the High Country (1962) and The Wild Bunch (1969), as well as a small role as a meter reader in Siegel’s Invasion of the Body Snatchers (1956).  Two other Invasion thesps also have parts in Private Hell: Richard “Mel Cooley” Deacon plays the manager of the pharmacy that was robbed (he’s the doc treating Kevin McCarthy in Body Snatchers) and King “Harvey Helm” Donovan is the hophead that robbed it (and is McCarthy’s best friend in the later film).  Private Hell also features Academy Award-winning actor Dean Jagger channeling his inner Barton Keyes as the police captain who suspects that Cal and Jack isn’t on the level (Jack reported that he searched the dead man’s suitcases after the car crash…but the luggage is free of his fingerprints) and a future Oscar winner, Dorothy Malone, is Duff’s supportive wife.  You’ll also spot Dabbs Greer (of Gunsmoke and Little House on the Prairie fame) as a bartender and Ken Patterson (another Invasion alum) as a one-armed desk detective (a rather macabre touch).  (The man croaked in the elevator in the opening credits is former Keystone Kop Chester Conklin.)

Private Hell 36 is an overlooked little gem that may not seamlessly blend its crime drama elements and cynical meditations on the American Dream in a tidy fashion (don’t examine it too closely or you’ll find a plot hole or two)…but its “messiness” is part of its charm.  Lupino fans will enjoy hearing her warble “Didn’t You Know?” and fans of movie locations will get a nostalgic thrill at seeing the Hollywood Park Racetrack in Inglewood (the track scenes were shot at the venue), which closed in 2013.  It’s down-and-dirty, fast-moving entertainment.