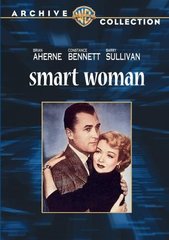 Where's That Been? - Smart Woman

It was a young upstart named Walter Mirisch - later to become an important film producer, winning the Best Picture Oscar in 1967 for In the Heat of the Night - who convinced Steve Broidy, head of Poverty Row champ Monogram Pictures, to create a new unit within the studio for the purpose of making higher-budgeted films in 1946.  That unit, Allied Artists, would eventually engulf the old Monogram by 1953; the studio henceforth released all of its product under the new name, and many of their productions - notably Riot in Cell Block 11 (1954), The Big Combo (1955) and Invasion of the Body Snatchers (1956) - marked a new artistic direction for a company anxious to put their Poverty Row past behind them.  (Sadly, the box office failures of Friendly Persuasion [1956] and Love in the Afternoon [1957] convinced Broidy to return Allied Artists to the Monogram days of old; Mirisch, bloodied but not bowed, struck out on his own as an independent, releasing most of his later films through United Artists.)

Smart Woman (1948) was one of the earliest of the Allied Artists successes; a film that in its day would have been described as a 'woman's picture' but now is usually accepted into the film noir fold.  The movie begins in a Los Angeles courtroom; a grand jury (familiar silver screen attorney John Litel plays the foreman) is frustrated by the inability of district attorney Bradley Wayne (Otto Kruger) to put the brakes on the shady activities of the local political machine, and decides to petition the governor to appoint a special prosecutor.  Wayne offers up the usual alibis as to why his office is ineffective...but it won't take anyone familiar with these kinds of films to soon suss out that the real reason for the roadblock is he's working with the very people he was elected to prosecute, partnered with a machine boss (who keeps his involvement on the down low) named Frank McCoy (Barry Sullivan).

A trust attorney with no experience in criminal cases, Robert Larrimore (Brian Aherne), is given the go-ahead on behalf of the governor - Larrimore has been assigned to litigate an election fraud case against one Fred Johnson (John Phillips), who just might beat the rap because the main witness scheduled to testify against him has vanished.  Even though Larrimore is inexperienced, he's got good people working for him; his ace investigator, Sam Corkle (James Gleason), immediately begins a hunt for the missing witness.  But Bob is going up against a powerful criminal defense attorney in Paula Rogers (Constance Bennett), who's been hired to defend Johnson on orders from Frank McCoy.  Paula's not wild about the assignment; though she believes that everyone is entitled to a defense regardless of their circumstances.

Corkle locates the witness, and Johnson is persuaded to plead guilty before the witness can reveal what he knows.  Paula is a good enough sport to shrug off the loss, and she soon begins seeing Bob outside of court...and not for any consultation on cases, if you know what I mean.  In order to make a corruption case against D.A. Wayne, Bob must locate another member of the machine (Taylor Holmes) who's conveniently disappeared...but this time he and Corkle are too late; the body of the dead man is found at the headquarters of a 'good government' organization that's really a front for the machine.

With the web of suspicion closing in, Wayne insists that McCoy take responsibility for the murder - reasoning that as D.A., he can arrange for Frank to get off with a lighter sentence.  The two men have a showdown at Wayne's home, and Wayne is killed in a scuffle over a gun.  McCoy then finds himself facing murder charges despite the croaking of Wayne being a clear case of self-defense...and insists that Paula defend him in court.  In a startling courtroom confession, Paula reveals to one and all the strange hold McCoy has over her.

A successful film star in the 1930s (What Price Hollywood?, Topper), Constance Bennett had sort of tapered off her movie roles by the 1940s to concentrate on the stage; but buoyed by her success in the 1947 Warner Brothers thriller The Unsuspected, she arranged to play what would be her last starring role in Smart Woman by developing and producing (though uncredited) the movie through her company, Constance Bennett Productions.  Woman would also be the final film released under Bennett's banner; she had originally planned to produce additional features through Republic, but scuttled that deal when her fifth husband, Air Force colonel John Coulter, received a transfer to Germany (she elected to go with him, taking along her two children).  The credited producer of Smart Woman, Hal E. Chester, would later go on to produce independent films across the pond; he's best known for the cult horror classic Night of the Demon (1957).

Bennett had invested wisely and well (she founded a cosmetics and clothing company, befitting 'the best-dressed woman in Hollywood')...so while she appeared in only a handful of films after Smart Woman (including a small role as herself in 1954's It Should Happen to You) she wasn't exactly starving.  But her gradual disappearing act must have been a disappointment to her silver screen fans, because Constance is quite good in this B-picture (okay, it's more like an A-minus) and she benefits from being reunited with actor Brian Aherne, with whom she had worked in the delightful screwball comedy Merrily We Live (1938).  (Bennett and Aherne collaborated on one last film together in Angel on the Amazon, released the same year as Woman.)  I've often referred to Aherne as 'the poor man's Ronald Colman'...but that shouldn't be interpreted as a slam; Brian often had to make do with lesser roles - yet still did first-rate work in pictures like What Every Woman Knows (1934), Sylvia Scarlett (1935), The Great Garrick (1937), Vigil in the Night (1940), My Sister Eileen (1942) and A Night to Remember (1943).

Smart Woman is an excellent example of Allied Artists' commitment to making quality pictures; the cast is most impressive, featuring Barry Sullivan (who had starred in an earlier AA noir that's also quite good, The Gangster [1947]), Otto Kruger, James Gleason and Selena Royle.  Johnny O'Shea (as a reporter who's sweet on Constance's character) and Isobel Elsom (as Bennett's ma) add a little comedy relief, and Woman is peppered with a ton of familiar character faces: Iris Adrian, Willie Best, Al Bridge, Cliff Clark, Jimmy Conlin, Charles Lane, Paul Maxey and Horace McMahon are just a few of the many.  Legendary cinematographer Stanley Cortez (The Magnificent Ambersons, The Night of the Hunter) adds the right blend of noir shadows and gloss (Woman occasionally plays like a romantic comedy with serious overtones) and the direction is capably handled by former dialogue director Edward A. Blatt, in the last of three films (the others being Between Two Worlds and Escape in the Desert) he would helm before returning to the stage.

Co-screenwriter Alvah Bessie would receive his last credit on Smart Woman until the release of a Spanish film in the U.S. in 1973 (España otra vez); his career, which showed enormous promise with contributions to such films as Objective, Burma! (1945) and Ruthless (1948), was sidelined by his being blacklisted as a member of 'The Hollywood Ten.'  At the time of Woman's release, the movie was well-received by critics and did well at the box-office - which isn't a bit surprising; I found the Warner Archive DVD release most entertaining.  Highly recommended.