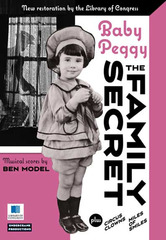 Where's That Been? - The Family Secret

With his appearance as Charlie Chaplin's co-star in The Kid (1921), it wasn't long before child actor Jackie Coogan became Hollywood's Flavor of the Month. Granted, Coogan wasn't the first child thespian to hit it big in motion pictures -- 'Baby' Marie Osborne was an audience favorite as far back as 1914, for example -- but the impressive box office take for The Kid prompted the industry to explore lucrative avenues of making big bucks with films showcasing juvenile performers.

Producer Hal Roach would institute one of moviedom's longest running series of shorts in 1922 with the first two-reel comedy featuring the kiddie troupe known as 'Our Gang,' while Jackie himself went on to success in films like Peck's Bad Boy (1921) and Oliver Twist (1922). A scant few weeks after the release of The Kid, the Stern Bros. Century Film Company cast two-and-a-half year old Peggy Jean Montgomery in a series of comedy shorts, and 'Baby Peggy' soon established herself as Coogan's rival in The Most Popular Child Actor in the Movies Sweepstakes.

In her early Century comedies, Baby Peggy was teamed with a trained pup who answered to 'Brownie,' but the talented moppet's popularity soon began to eclipse the canine's, and Brownie eventually faded from her two-reel shorts. (I'm guessing they took him to a spacious farm upstate somewhere, if past parental excuses are any indication.) As for 'The Million Dollar Baby' (so nicknamed because Peg was pulling down a salary of .5 million a year), she would outgrow comedy shorts and move on to feature films at Universal with vehicles like The Darling of New York (1923) and Captain January (1924).

One of her most popular Universal 'Jewel' features, The Family Secret (1924), was released to DVD in October, restored by the Library of Congress and presented courtesy of Undercrank Productions (in association with Greenbriar Picture Shows).

'The family secret' of the film's title is that young Margaret Selfridge (Gladys Hulette) has clandestinely wed Garry Holmes (Edward Earle) because her father Simon (Frank Currier) and Aunt Abigail (Lucy Beaumont) disapprove highly of Garry -- Simon is convinced the man is simply a fortune hunter. The surreptitious marriage is going to be revealed soon, however, because Maggie has been experiencing a loss of appetite, tipping off the audience that she is great with child. In fact, both Simon and Abby send Maggie off for a 'rest' (probably the same place where Brownie the dog wound up) as they often did back in that era; when Maggie returns home, she's accompanied by an addition to the household.

Margaret's gamble that her father and aunt will change their opinion about Garry once they learn of their marriage and baby does not pay off; Simon orders Garry off the premises and warns him not to return. Bah! True Love pays no heed to Father Selfridge's admonitions; Garry returns in the middle of the night to collect Maggie and his new daughter, prompting Simon to have him arrested for burglary. Simon does not, however, inform his daughter that his actions have resulted in Garry's imprisonment -- he lies and tells Maggie that Garry ran off and left her. Three-and-a-half years later, Garry is out of the jug and anxious to see his wife and now four-year-old daughter (Baby Peggy). As you've probably guessed...things get a bit awkward before the guaranteed happy ending.

The Family Secret is not a new-to-DVD release; it's been available through various online Mom-and-Pop vendors for some time now. But its restoration most assuredly is, thanks to the Library of Congress and the Fondazione Cineteca Italiana (Milan), the UCLA Film and Television Archive, and David Stenn. At the heart of Secret's DVD release is silent film accompanist and historian Ben Model, whose Undercrank Productions label can take a deserved victory lap for making many silent comedy treasures accessible to modern home video audiences with engaging titles such as The Crackerjack (1925) and Flying Luck (1927).

Ben is also the creator of the 'Accidentally Preserved' video series (Volume 2 was reviewed previously here at ClassicFlix), which brings to light abandoned comedy shorts from equally neglected funsters from the silent era. In addition, Model composed an original organ music score for the 35mm restoration of Secret and its accompanying bonuses of two rare 'Baby Peggy' shorts, Circus Clowns (1922) and Miles of Smiles (1923), and brief clips from entries in the 'Screen Snapshots' and 'Screen Almanac' series.

I've stated it here and in other online venues, but classic film needs more people like Ben Model. The history of film studios taking care to preserve their celluloid legacy is nothing short of pathetic (though there were some exceptions, like MGM and Walt Disney, visionaries who saw the value of taking care of their product) and because little has changed over the years, it's the Ben Models of the world who recognize the importance of preserving these films when others are content to dismiss them.

'Baby Peggy' -- who later changed her name to Diana Sierra Cary, and supplemented her earlier film career with stints running a greeting card company and as a film historian/author -- appears to be the last living silent film star. So many of her films have been sacrificed to the ravages of time and neglect, which is why the reappearance of The Family Secret in a restored print is not only a godsend to her fans but a new generation of people unaware of the delights awaiting them in silent cinema.

Directed by comedy veteran William A. Seiter (Why Be Good?, Sons of the Desert), the content of The Family Secret might come across as corny to modern audiences (despite touching on interesting topics as class and pregnancy). Its semi-Dickensian feel owes a lot to its source material; the author of Editha's Burglar (which inspired both this film and a play by Augustus Thomas, The Burglar) was Francis Hodgson Burnett, who also penned Little Lord Fauntleroy and The Secret Garden. The treacly plot also appears to be a hallmark of many Baby Peggy features: in Secret, the little tot longs for the return of her father (which coincides on the celebration of her fourth birthday) while in Captain January she's taken in by a lighthouse keeper while her real parents search high and low for her whereabouts.

Still, Peggy makes the material work; she's charmingly plucky in Shirley Temple-fashion (Shirl would do a remake of Captain January in 1936), and the audience's sympathies are immediately with Peggy in Secret once they see she's been placed in a situation where she must bear the antipathy of her grandfather and aunt, neither of whom have an affinity for children. (In their defense, they eventually come around because she's just so darn cute.)

The story of Diana Sierra Cary, from child actress film icon to movie extra to chronicler of the careers of her fellow kid thespians, is told in a wonderful 2012 documentary, Baby Peggy: The Elephant in the Room, the DVD version of which also includes Captain January and three of her Century film comedies. Through the efforts of dedicated individuals, classic movie fans can now add The Family Secret to the list of essential films for fans of an adorable moppet who thankfully is receiving recognition long past due.