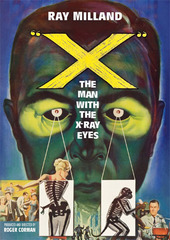 Colorama - A Deeper Look at X: The Man with the X-Ray Eyes

Film is, first and foremost, a visual medium. No matter how high the quality of dialogue, music, sound, story, and performance, if a movie can't find a way to express its ideas through the images, then filmgoers will inevitably feel cheated. In that respect, a horror film dealing solely with the idea of sight, with a central protagonist whose fatal dilemma is that he can't ever turn his horrible, superhuman vision off, is in many ways an ideal movie premise. Roger Corman's 1963 picture X: The Man with the X-Ray Eyes takes that central premise, spinning it into a dark, deeply unsettling movie that starts as a typical science fiction fable of a scientist who dares too much and ends as a cruel but thought-provoking meditation on the nature of things seen and unseen.

This movie's intense focus on the nature (and horror) of looking makes it, in some aspects, like a younger, B-movie cousin to films like Rear Window and Peeping Tom. But where those movies saw the dark side of looking as voyeurism and passive sadism, X takes the much more Lovecraftian notion that it's not so much the twisted human desires which cause problems as it is the human inability to comprehend more than a tiny bit of what we can see.

X tells the story of Dr. Xavier (Ray Milland), a brilliant doctor and researcher who has developed a serum called X that promises to push the boundaries of human sight. By using X, people will be able to see wavelengths on the visual spectrum that were previously unknown. He tests the serum on a monkey, only for the monkey to die, seemingly driven mad by seeing things it can't comprehend. His colleagues, Dr. Fairfax (Diana Van der Vlis) and Dr. Brant (Harold J. Stone), urge him not to move forward, but Xavier is convinced X will be a breakthrough benefiting the entire human race.

He begins using it himself and quickly discovers that not only can he now see more colors and images, he can also see through people's clothes. As he starts taking more, he begins seeing the insides of their bodies, locating the exact spots of their injuries and medical conditions. However, his attempt to use this ability to save a girl on the operating table ends in tragedy and Xavier becomes a fugitive from the law. As his abilities grow stronger, to the point he can see through his own closed eyelids, he sinks further and further, going from a sideshow 'mental man' to a faith healer to a gambling master and finally to a crazed wanderer. There is no respite for a man who can never, ever stop looking.

X stands out as one of the most chilling and quietly effective movies Roger Corman ever made. Despite a typical Corman budget and the limited effects he had at his disposal, the famously resourceful director is able to suggest the possibilities of Xavier's new vision by such simple tactics as swapping in footage of inner organs and blurring the camera shots to denote Xavier 'leveling up' to a new range of sight. There's the inevitable gag of having Xavier at a party and him suddenly seeing all the partygoers naked, but it's played relatively tactfully by Milland and Corman; clearly the filmmakers knew they had to throw it in to give the movie a cheesy selling point. But Corman has more subtle tricks up his sleeve. He's able to suggest the increasingly awful strength of Milland's eyes by shifting the images he sees into fractured bits of prismatic color, framed by an eerie halo of light. It's like looking at a forerunner of how directors would go on to use the psychedelic imagery of acid trips in the latter part of the decade.

In terms of looks, X in its latest Blu-ray edition looks like a sober, polished piece of work and even with the colors scrubbed up, it doesn't wear its cheapness on its sleeve. It's a movie that looks very different from the dramatic shadows and rich hues of the Corman and Price films; most of the costumes and backdrops are fairly staid. It makes Corman's sudden deliberate bursts of garishness, like the gaudy yellow robe Milland wears for his role as the carnival sideshow attraction or the black contacts he puts on for the film's grand finale, all the more disturbing. Xavier lives in an ordinary world and as he himself soon realizes, he'll never belong to it again.

Ray Milland, once an A-list actor with an Academy Award and a long line of top-tier films behind him, approaches the character of Dr. Xavier with the same dignity and focus he brought to his preceding roles. It would have been easy for him to turn Xavier into a cackling mad scientist or the bored sketch of an actor walking through for an easy-paycheck. Instead, Milland's Xavier emerges as a genuinely tragic hero. He's quiet, serious, and altruistic, completely uninterested in using X for personal gain. While Xavier keep taking higher doses of X, despite the fact the serum keeps bringing him more and more suffering, the film never says outright what's driving him onward. Is it an addiction to the drug itself? Or has the drug affected his mind, driving him mad? Is he just obsessively motivated by a desire to help humanity? Or is it really his hubris in trying to see things no mortal man has ever known before? The movie hints at all these possibilities without settling on one.

This is Milland's show all the way, even though both Diana Van der Vlis and Harold J. Stone provide sympathetic support as his colleagues and friends. The polished, blonde Van der Vlis is the requisite kinda-sorta love interest, almost thirty years younger than Milland to boot. Still, she's got a raspy contralto voice that, at times, if you stretch your imagination, evokes Milland's old costar Jean Arthur. The movie doesn't try pushing the attraction too far and it's left as nothing more than wistful. Stone brings a believable ordinariness to a character suffering the movie's most rushed and awkward plot twists. In a way, the genuine kindness and loyalty of Van der Vlis and Stone make Xavier's suffering all the more bitter. He was never the tormented outsider driven to insane acts through isolation. He was a respected professional who could have had love and friendship and has traded it away for nothing.

The closest thing the film has to an actual villain is the carnival huckster played by a young, conniving Don Rickles. Rickles is the Id to Xavier's Superego. He's greedy where Xavier is altruistic, lustful where Xavier is polite, and smiling where Xavier is serious. Rickles is the one who keeps pushing Xavier to use his abilities for women, money, and power and the ironic thing is Xavier, with the loftiest ideals in the world, keeps finding himself trapped in the sleazy, cliched roles you would expect for the man with the x-ray vision. He's the peeping tom, the sideshow freak, and the cheating gambler. By the very end, he becomes the monster.

The ending of X is infamous for the sheer, merciless horror it wreaks on Xavier. The final scene is so haunting that, to this day, it's inspired a persistent legend that Corman shot and filmed something even bleaker, a legend possibly beginning with Stephen King devoting a section to it in Danse Macabre. Without giving anything away, I'll simply say the ending that exists is great the way it is. Xavier has the vision of a god and the tormented, battered body of a desert wanderer. It's only right the movie ends on something straight out of Biblical scripture or Greek tragedy. And if you want to imagine the alternate ending, the movie certainly leaves Xavier's final fate open. There are some things best left unseen.

Aubyn Eli blogs about color movies-and a whole of black-and-white ones-at The Girl with the White Parasol.